Beyond the Big Data buzz! 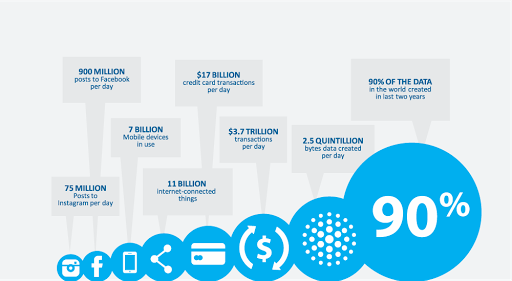 Like Hey, What is BigData? Why it is given so much of importance? Where it has come from?….. Do you know such facts? 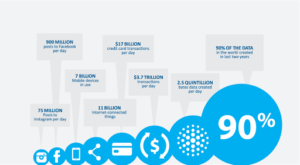 Well, It’s fine if you don’t know. I’m sure that in this post I will be able to clear your queries about the Big data fundamentals. The techno world which is tremendously evolving year by year. Being a part of this fast growing technology. You must be attentive towards it, in order to acquire some knowledge about the changes happening. It doesn’t matter whether you are an IT person or a non-IT person. Because technology has an impact on everyone’s lifestyle. It fills the gap between every age groups.

So let’s start with, What is big data?

Basically, every large, as well as small organization, has their own perspective of defining and stating the term “big data”.  But the factual thing is, the term “big data” is known by the 4 Vs that is Volume, Velocity, Variety, and Veracity. Each Vs has its own attributes and drivers.
Attributes are nothing but the features, like for every Vs they are called “measures”. Because each V has its own measures. Say for Volume, the big data is measured in terms of size(Petabytes to Zeta bytes and God knows). For Velocity, in terms of, at the rate of speed(kbit/s to Tbit/s). For Variety, in terms of structural degree as the data is collected from various data sources (structured, non-structured and semi-structured). For Veracity, in terms of clarity, consistency, and degree of accuracy which can tell whether the data is real or fake. 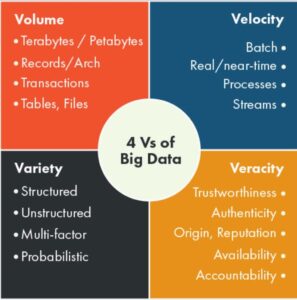 Drivers are the element who drives these each Vs. Just like a person who drives a car is known as a driver. Here, Data drivers are different devices like mobile, laptops, sensors,etc..which enables every human to connect, produce and explore tonnes of data via various social networking sites, web applications.
Digital network components are the source of ever-increasing data that too with the fastest speed with different varieties and of accuracy levels. Today, storage is not an issue but the exponential increment of data need to be processed at a rapid speed to gain meaningful insights. This can be achieved by adapting the new processing technology tools, frameworks and various new methodologies for every type of data handling. As there is tremendous competition growth in the various sectors of the industry.

One who quickly adapts to the emerging data technologies, eventually they would become a successful Businessperson or an Industry or an organization.

So, Why there is a craze about data processing?

The secret of success is hidden in the power of Big Data processing. When there is more data about any organization then accuracy level of insightful knowledge about that domain would be high. Eventually, organizations can able to optimize the solution for their very critical problems by predictions. They can be able to handle any kind of situations effectively. And the operational costs and maintenance costs would be lowered and managed in a proper way. Thus, ultimately there would be an increase in revenue.